Those Phenomenal Women
Images that have come to personify beauty, like the original revered Madonna and Aphrodite, have set women to an impossible standard for centuries. There is an underlying patriarchal view of the world that attempts to box beautiful concepts of women into stereotypes. Modern day Madonnas and Aphrodites found in our society, from the fast and glamorous Hollywood stars to the small town college students, have emerged to regularly shatter these commonly held perceptions. Elizabeth Levis is one of those phenomenal women.

Elizabeth Levis
She boldly flaunts her nearly platinum blonde hair with pride, shrugging off the stigma that usually follows girls with blonde hair; but, it isn’t her hair or looks that encompasses who she is. In step with her idol, Marilyn Monroe, there are deeper and fascinating components that make Levis the sparkling pearl gently nestled in the sand waiting to be discovered.

Growing Up
Levis, nicknamed Lizzie, grew up in Center Valley, outside of Allentown, Penna., with a loving and a beautifully supportive family. “My family really focuses on making everyone happy and being selfless and appreciating what you have,” Levis said. Her father grew up very poor and had a tough family life; however his persistence led him to be a successful businessman as well as family man, who owns his own business and wondrously inspires his daughter to reach for the same goals in life. She attended Southern Lehigh High School, which was the typical “boring” small-town school according to Levis, and now is a freshman in Chestnut Hill College majoring in communications. She wants to entertain and be on TV one day, possibly in Philadelphia or overseas. “I want to be very successful, have a nice house, love what I’m doing and have someone to share it with,” Levis said. 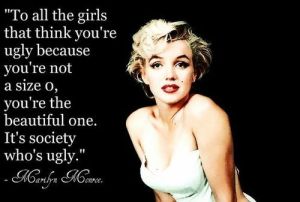 Influences In Her Life
Women, like Marilyn Monroe, actively worked against stereotypes that were conveniently placed upon them, and eventually paved the way for girls like Elizabeth Levis. “I see parallels in the fact that instantly when people see me they think I am just going to be a ‘dumb blonde’ or ditzy,” Levis said, “also, when I was younger I kind of felt like a loner and tried to keep to myself and she experienced that a lot in her life.”
Although Levis isn’t striving to be the next Monroe, she has managed to find substance and a real idol she can identify with; regardless, of whether the world sometimes stereotyped, scandalized, or gossiped about her. It takes tenacious heroines like Elizabeth Levis or Marilyn Monroe to break out of the ‘dumb blonde’ mold and instill the same confidence in younger generations.

Blondes Have More Fun
“I look up to her because she came up from nothing,” Levis said.“She was adopted at a young age, and she wanted to be successful. She wanted to do something and she did.” Levis knows that she may not ever be a millionaire like an actual “Levi’s kid,” but a persistent attitude, modeled after her father and certain female idols, continue to drive her towards her passions and away from any negativity that society tries to force on her. Blondes do after all have more fun, but it is the confidence and integrity that truly makes Elizabeth Levis more than just that.