Discuss Lynne Ramsay’s poetic films with Every Frame A Painting

What the film lacks in faces on the screen it makes up for in outstanding shots, CGI or not, of Earth as it spins through unbounded space. In fact, spinning is probably the key element to this movie. A single motion can set off a chain reaction that we have no control over, yet we find purpose in straightening out and moving forward. Drive to live is what makes us unbearably and remarkably human. Clooney, who plays the funny, charming, and dashingly experienced astronaut to Bullock’s fledgling character, is also her conscience, her will, and philosophically a projection of the inner voice of God that tells us not to be afraid.

Playing to the depths of our souls, the unknown, and space. Even if the movie wasn’t in IMAX, I still would’ve cringed. Among the phenomenal graphics that pushed us deep into our seats with the singular prayer that what we were witnessing was in fact a movie and not some awful time warp where we had been transported into our deepest fears. An unconventional horror film that doubles as a realistic Sci-Fi flick, Gravity, starring Sandra Bullock, George Clooney, and a clawing realization that death is always closer than we think, made this definitely worth the $17 ticket and IMAX glasses.

“Life in space is not possible.”

The premise of the movie, stated in the opening credits, is that “Life in space is not possible.” A point that turns a paradox into a running joke as we follow the astronauts through their struggle to survive a pernicious environment that seems hell bent on testing their will at every turn. The larger symbolisms here, that escape most, is that we live on a planet revolving in space. How is our lives possible and why? Questions that the movie skillfully avoids. It does, however, confront the unknown and chaos that orbits Death. In this movie fear, death, and fear of death are palpable and concrete. Not the abstract ideas we think about among the daily grind of menial existence but right against the glass; as close as a crack in a helmet, a slip in life’s crucial grip, or panic at the wrong moment that flings us off into a dark, shapeless void. Scary as hell, to the point where all you can do is grip the seat and hope that the intensity will subside, which it never does. The film makes the audience feel as if they are just as lost in space, holding their breath like each one is a grain from God. No one inhales too much, not until the end do we all dare to breathe deeply with the character.

Arthur Schopenhauer wrote about The Will as the fundamental and indestructible building block to mankind, that intellect is irrelevant in the grand scheme of our lives. This film demonstrates his theory with the interaction between the only two fully developed characters, but mainly within the conversations she has with herself. Tom Hanks had Wilson in Cast Away, Will Smith had Sam in I am Legend, but the film makes the point over and over again that she, Ryan, is the “sole survivor”. It has a final tone to it that permeates throughout her experiences. She is on her own disconnected from the living on Earth, and even the dead in space, curled into the fetal position, she has only herself and her will to keep going.

Today I begin a new life. I am the master of my abilities… and today will be a great and beautiful day.
— Baby Boy

Saw this movie the other day. Unsuspectingly deep words from such a trivialized character. go figure.

End Of Watch
End Of Watch was far more poignant than it leads the audience to believe it will be. The commercials try to sell the film as a witty cop comedy shot in the everyday shaky handheld camera style that seems to be dominating television nowadays, which is completely not the case. When it premiered in September the R rating should’ve clued some people into the serious underlying tones that would pervade the screen for the next hour and 49 minutes.

The Heroes
The movie begins with the introduction of Officer Taylor played by the tenacious Jake Gyllenhall, who also doubles as a film student at a university in California. He decides to tape himself and his partner Officer Zavala, played by Michael Pena, on their daily beat across one of the most dangerous neighborhoods in South Central L.A. The chronicle of these two loose cannons but wildly brave, and at times, reckless cops gives the audience a look into the lives of modern warriors. Throughout their journey the cops continue to stumble onto more than they bargained for.

You’re on Candid Camera
Thankfully the director David Ayer, who is well experienced in gritty, dirty cop movies such as the infamous Training Day starring Denzel Washington, decides to splice in some comic relief and seemingly mindless dialogue to pull away from the more gut-wrenching scenes. At times the constant shifting in odd camera angles adds a level of True Taxi Cab Confessions to much of the movie, but it works extraordinarily well in capturing the tension and severity of the situations that these cops place themselves in on a regular basis.

Leading Men
Although Jake Glyllenhall is committed to every role he plays, and has some experience with exploiting dangerous professions, like in the Academy Award-winning film Jarhead, it was really Michael Pena that stole the show. Pena delivered a great performance that wasn’t over the top. His acting chops were first established in intense and gripping films such as Crash, where he played a lowly handy man that struggles to provide for his family in a racially-charged society. He was meant to be the supporting actor, but someone watching could easily feel like Gyllenhall fell into his role. However, the exchange of power between the characters and the actors made them appear as real partners in hostile situations where they needed to depend on each other. 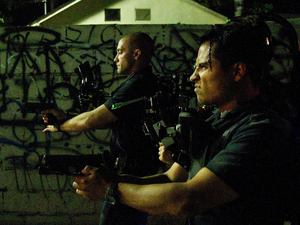 Their dynamic propelled the movie forward and greatly impacted the connection one could feel for these characters. Let’s face it, no one initially likes cops, and its hard to sell the plucky good cop dynamo duo to a skeptical audience. The director and the actors managed to refrain from the whole Starsky and Hutch routine though, and maintain a necessary realism that not only mirrored the form of the film and made it enjoyable as well as relatable.

That Ending…
Quite honestly I expected the film to be bad and I was thoroughly surprised with the ending, with the acting, the overall storyline and presentation. The tragic climax of the film in the last scenes shocks the audience out of the illusion of security and adventure created in the beginning. Suddenly the story becomes real and unavoidable, like an enjoyable ride that ends in a fiery car crash, and teaches the characters and audience a harsh lesson about life’s beautiful simplicities and unfortunate consequences.

I appreciate the topics and conversations that it raised between my fellow audience members and me during and long after the credits rolled. If you like deep impactful discussions with a little blood and gore against the backdrop of a film version of the reality show Cops, then this movie is for you. If not then go see it anyway. Bury the “I don’t want to see a gay cowboy and a Mexican on screen” mentality and look beyond the actors themselves to the portrayal of men and women that have risked their lives and families to keep us safe. Men and women whom face death everyday and continue to do so for all our sakes.
I give it a 3.5 out of 5 stars.