Two men were arrested and indicted after breaking into a local business, Breakers, a billiard hall and bar at 549 E. Meadow in Mohave County, earlier this morning. The two assailants George Butner, 38, and Max Brewster, 24, were apprehended shortly after the crime was committed. They’re currently being held in the Mohave County Jail and charged with burglary, resisting arrest and vandalism, with a bond for each of them of $15,000.

“I have no idea what the two men might have been looking for,” said Manager Hank Ng, 44. The pair broke through a back window at about 4:25 in the morning to enter the club, setting off a silent alarm. Ng identifies footprints outside the broken window, and a barstool had been set under the window for easy access into the room. 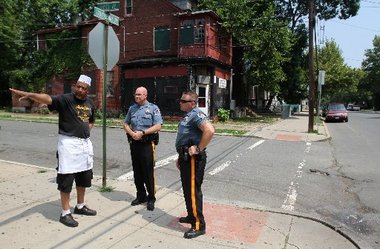 Troy Delmer, 33, manager of Bill’s Breakfast Burrow, across the street from Breakers, saw some of the action. “It was about 5 a.m,” he said, “Well, I looked up and saw two men run from behind Breakers…They didn’t even make it out of the parking lot when the cops got ’em. Those cops were fast.”

Sgt. Ray Broadmall of the Kingman Police Department, who was unable to comment at the scene, corroborated Delmer’s relation of the events.